Atrial fibrillation occurs when the electrical impulses from the SA node are overwhelmed by disorganized impulses that originate in the atria and pulmonary veins. This leads to irregular impulses which may last from minutes to weeks or even all the time. Typically, the P wave disappears and is replaced by unorganized electrical activities.

Ventricular fibrillation occurs when there is uncoordinated contraction of the cardiac muscle of the ventricles in the heart, making them quiver rather than contract properly. This can happen when the ventricles are excited by multiple pacemakers, which may be the result of hyperirritable myocardial cells. Immediate intervention is required as the chance of survival decreases exponentially after 30 seconds.

Ventricular flutter is a tachycardia with a rate over 200 beats per minute. The ECG looks like a sine wave without any clear definition of the P, QRS and T waves. In many cases, it would transition into ventricular fibrillation after a short time and can result in sudden death. The causes are the same as ventricular fibrillation, but because of the electrical conduction pattern in the heart pathways, an organized signal is provided to the ventricles, allowing them to beat 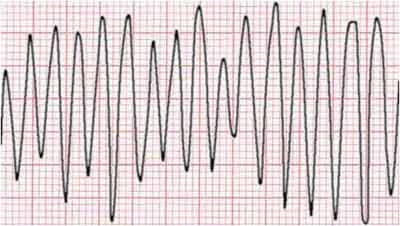 When the P wave exceeds 3mm, it is generally a result of right atrial enlargement. P wave associates with the atrial contraction and reflects problems related to atria. 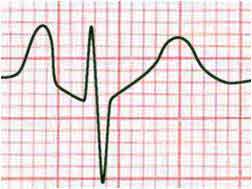 When the P wave duration exceeds 100ms with a notch, it is generally a result of left atrial enlargement. 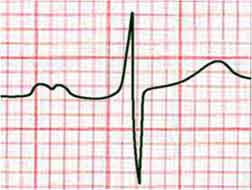 The PR interval represents the time needed for an electrical impulse from the sinoatrial (SA) node to conduct through the atria, AV node, and a special network of heart muscle cells for transmitting the electrical impulses (bundle of His, bundle branches, and Purkinje fibers) throughout the ventricles. Thus, as shown in electrophysiological studies, PR interval prolongation (ie, first-degree AV block) may be due to conduction delay within the right atrium, the AV node, or anywhere along the heart's electrical conduction system. AV nodal dysfunction accounts for the majority of cases.

Similar to the first degree AV nodal block, it is a malfunction of the heart electrical conduction system. In the third degree AV block, the atria and ventricles work independently of each other. The P wave and QRS complex are no longer in sync.

The extra beat or ectopic beat can be from the SA node or from a secondary pacemaker. In the first case, subsequent beats are in sync with the extra beat; in the second case, the extra beat is inserted in between two regular beats. If the extra beat occurs too soon, the heart conduction system may not be ready to accept another one and a block would occur.