Pulse oximeter can measure your SpO2 and blood flow fluctuation 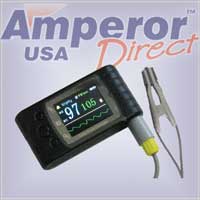 Because of the nature of pulse oximeter, measuring the pressure from a pleth waveform has not been possible. However, the information has shown to be useful in diagnosis and in gauging the severity of illness in newborns. Many doctors use the pulse oximeter's pleth waveform as an early indication for cyclic changes in physiology. If the variability increases, it indicates a change in the intrathoracic/blood volume relationship.

The blood flow is normally shown as a waveform using a bar or graph. It can provide useful information regarding the heart condition. 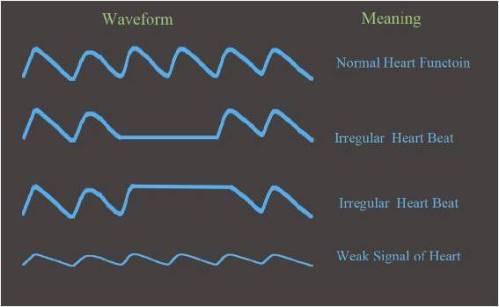 Heart rhythm. Pleth is useful to detect irregular heart rhythm. The primary function of the heart is to supply blood and nutrients to the body. The regular beating, or contraction, of the heart moves the blood throughout the body. By watching the pleth waveform, the heart beating pattern is clearly displayed. When a heart patient is having discomfort, it is important to observe the pleth waveform and relate the information to his doctor. Since the discomfort is generally transient, a doctor may not be able to see the waveform during an office visit.

There are several causes for the weak signal :

Low blood perfusion can be caused by cold temperature and the person's general health.

Respiration. During inspiration, intrapleural pressure decreases by up to 4 mm Hg which distends the right atrium, allowing for faster filling from the vena cava, increasing ventricular preload, and increasing the stroke volume. Conversely during expiration, the heart is compressed, decreasing cardiac efficiency and reducing stroke volume. However, the overall net effect of respiration is to act as pump for the cardiovascular system. When the frequency and depth of respiration increases, the venous return increase leading to increased cardiac output.

Only more advanced pulse oximeter would provide the waveform. Read this article "Photoplethysmograph" for more information how the waveform is related to breathing, hypovolemia, and other circulatory conditions.

How to Interpret Pulse Oximeter Readings

What is Perfusion Index (PI)

What is a Pulse Oximeter