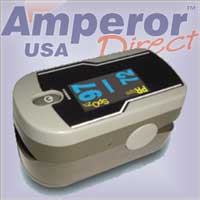 Oxygen saturation is defined as the ratio of oxy-hemoglobin to the total concentration of hemoglobin present in the blood (ie Oxy-hemoglobin + reduced hemoglobin).

Hemoglobin is an iron-containing protein bound to red blood cells and makes up nearly all the oxygen presence (there is a minute amount dissolved in the plasma). Hemoglobin is responsible for transporting oxygen from lungs to other parts of the body, where the oxygen can be used by other cells. Oxy-hemoglobin (HbO2) is the bright red hemoglobin that is a combination of hemoglobin and oxygen from the lungs.

Here is an informational video by the New England Journal of Medicine that explains in detail what is oxygen saturation levels or SpO2 and the technology behind pulse oximetry.

Pulse Oximeter: A pulse oximeter is a device intended for the non-invasive measurement of arterial blood oxygen saturation and pulse rate. Typically it uses two LEDs (light-emitting diodes) generating red and infrared lights through a translucent part of the body. Bone, tissue, pigmentation, and venous vessels normally absorb a constant amount of light over time. Oxy-hemoglobin and its deoxygenated form have significantly different absorption pattern. The arteriolar bed normally pulsates and absorbs variable amounts of light during systole and diastole, as blood volume increases and decreases. The ratio of light absorbed at systole and diastole is translated into an oxygen saturation measurement.

CO-oximeter: A CO-oximeter is a device for detecting hypoxia and works similar to a pulse oximeter. CO-oximeter measures absorption at several wavelengths to distinguish oxy-hemoglobin from carboxyhemoglobin and determine the oxy-hemoglobin saturation even when the patient has carbon monoxide poisoning.

Arterial blood gas (ABG) analysis: This is a blood test using samples extracted from an artery. The test determines the pH of the blood, the partial pressure of carbon dioxide and oxygen, and the bicarbonate level. Many blood gas analyzers will also report concentrations of lactate, hemoglobin, several electrolytes, oxy-hemoglobin, carboxyhemoglobin and methemoglobin. The arterial blood gas analysis determines gas exchange levels in the blood related to lung function.